As students returned to school in September, the Mississippi Valley Field Naturalists (MVFN) natural history lectures resumed at the Almonte United Church social hall ‘classroom.’ You do not need to be an expert to enjoy these talks, just a curiosity and fascination for our natural world. And, in the case of the soil presentation which set the groundwork, so-to-speak, for the series “Nature Beneath our Feet”, some soil vocabulary would also have been useful. Guest speaker for “Lanark County Soil FUNdamentals” was soil scientist David Kroetsch, a botanist and ecologist with the Canadian Soil Information Service. Kroetsch was involved in soil survey ‘upgrade’ work in Mississippi Mills in 2000 and participates in environmental education programs such as the Lanark County Stewardship Council’s Envirothon for youth.

As Kroetsch began his MVFN presentation on soils, it was evident that many of us, with the possible exception of farmers and soil scientists in the audience, would be learning a new vocabulary– unfamiliar words such as ‘gleysols’ (soils that are greenish-blue-gray due to a predominance of a reduced vs. oxidized iron, caused by wet conditions) or ‘catena’ (from Latin for chain and referring to a group of related soil types with similar ‘parent’ material but different drainage). On the other hand, familiar words such as ‘horizon’ took on additional new meanings with reference to soil.

We were all familiar with the word soil, but what is soil really? Kroetsch explained that from early on soil was recognized appropriately as a natural living ‘thing’, understood to be different from bedrock, and formed by complex processes. “It is the unconsolidated material on the surface of earth, comprised of minerals, organics, water and air and which supports plants whose roots grow into it”. In the 1930’s answering the question, how does soil form? Hans Jenny, the ‘father of soil genesis,’ developed fundamental soil science principles and some terminology still used today. Soil is formed over time and five main factors determine the end product: the parent material, the living organisms present, the climate, the topography (surface shape of the land), and time itself.

Soils sharing the same parent material are related. The material might be unsorted glacial material or till, organic deposits from plants such as in swamps, lake deposited material as in lacustrine soils, or other parent material. Secondly, living organisms of many types are present and play a critical role. These include bacteria such as nitrogen fixers critical for the nitrogen cycle. Fungi could include the mycorrhizae, a group of fungi that form essential symbiotic relationships with the roots of plants and trees. Microfauna are also there, i.e. tiny animals such as nematodes and the fascinating tardigrades, among others. A little larger, the mesofauna include mites, springtails etc., and finally, there are macrofauna such as slugs, snails, insects, earthworms, beetles and larvae which feed on other soil organisms and decaying matter. The third factor, climate, further ‘molds’ soil through cycles of freeze thaw, drying, and precipitation, and may alter soil pH (acid or base). The pH of soil in turn affects its overall chemistry, for example high acidity can cause calcium carbonate to be leached from clay soils making them more mobile. Fourthly, topography, or the shape of the land where the soil is, can affect the soil, i.e. whether or not it is on a slope or in a depression determines whether moisture will accumulate or drain away. Precipitation, moisture and drainage interact. Heavy precipitation and drainage can result in a lot of things being selectively removed from the soil, critically changing it, such as when ‘Leda’ clay suddenly starts to flow, compromising human built structures. A single soil type becomes a catena, depending on the slope of land and how well drained it is. For example the Almonte catena has subtype ‘Almonte’ on good drainage and ‘Snedden’ on imperfect drainage. The fifth factor is time.

Over time the ‘horizonation’ of the parent material occurs, things are added and changed over 10, 000 years. Soil horizons are all the distinct layers in soil, of different thickness, colour and texture which you see when you dig a large deep hole. A summary of the horizons present in the soil is a ‘soil profile’. Most soils have at least 3 or 4 horizons: a surface ‘O’ layer which is the organic layer. This layer is very thick in forests, or at least it should be. Often there is an ‘A’, ‘B’ and finally a ‘C’ layer which may be the ‘parent’ rock material.

Looking at the big picture, Kroetsch explained that on a landscape level, forces of climate and the glaciers retreating created broad distinctive zones of soil and vegetation. For example, in much of Lanark County receding glaciers scraped surface material off ancient Precambrian bedrock leaving hard bare rocky ground. In other parts of the county productive lacustrine soils such as the Almonte soils were deposited from the Champlain Sea which filled part of Lanark County after the glaciers receded. To map distribution of soil types across the country, soil surveys are done by Agriculture and Agri-Food Canada using protocols described online at http://sis.agr.gc.ca/cansis/taxa/cssc3/intro.html; the first in Canada was done in1914 by A. J. Galbraith. The Canadian soil classification system is hierarchical, similar but not identical to one used in the U.S. Examples of Canadian soil types classified are chryosoils (frozen soils), podzolic soils (generally acid soils on the Canadian Shield), chernozyn (associated with grasslands) and gleysols (poorly drained but productive for agriculture when used with tile drainage, such as in the heavily farmed regions of Southern Ontario). Modern soil survey work, Kroetsch explained, involves site descriptions with GPS, and including elevation, slope, aspect and length of the slope, soil profiles and photographs. Vegetation, land use, stoniness, rockiness, and seepage/water table depth are recorded. The information gathered and interpreted is used by farmers and by municipalities for land use decisions.

The last complete soil survey of Lanark County was done in 1961and the original report and soil maps from then are posted at http://sis.agr.gc.ca/cansis/publications/surveys/on/on40/index.html.  One can review or download 2 large maps (each one is in two pieces, a north and south section), the ‘Soil Map of Lanark County’ which maps in detail the soil and soil composite types found across Lanark County, and the ‘Soil Capability Map of Lanark county’ which shows the corresponding ‘soil capability’. This is the capability with respect to agronomic usefulness ranging from Class 1 to Class 7. For municipal purposes Class 1-3, which are good agricultural lands, are ‘protected’ in all official plans, Class 4 is marginal for cultivated field crops, Class 5 for permanent hay pastures, and Class 6 and 7 is classified as having no agricultural use. Keep in mind though that the groupings do not consider, for purposes of agronomic capability classification, that the land may be well-suited to production of trees, wild berries and other plants not requiring cultivation.

Those attending the Kroetsch lecture will hopefully have a firmer grasp of concepts to interpret soil survey maps. However, to better understand the soils and ecosystems of the area it helps to have a ‘big picture image’ of the underlying geology of Lanark County. Local ecologist Paul Keddy’s book Earth, Water, Fire: An Ecological Profile of Lanark County is a very useful resource in this regard and helps put into perspective how the geology affects the soil type or lack of soil and the natural environment. Maps in the Keddy book show margins of geological formations such as old Precambrian rock or land over newer sandstone or limestone plains, and areas formerly covered by the ancient Champlain Sea, as well as locations of the many areas of natural and scientific interest in the county. For example, the Burnt Lands Alvar, a unique area of very shallow soil over limestone pavement, or Wolf Grove where the Canadian Shield juts up presenting an obstacle to road building and farming alike. Lands such as that, on the very old Precambrian rock, include much of Lanark County, particularly in north and west. Hard granite rock predominates and there you find extensive areas of rocky soil composites with shallow, acidic soil or bare rocky ground. These are seen on the 1961 soil maps as the extensive beige areas which are ‘Monteagle sandy loam-Rock’ (indicated as 237,700 acres worth in the report) and extensive dark brown areas of Tweed sandy loam-Rock complex (some 124,000 acres), both with Class 7 capability. Such land though has much value for wildlife habitat and leisure. Very mucky wet areas which do not drain may be too wet for agriculture but these swamps and bogs are very productive and are classed as significant wetlands. On the other hand areas south and west in Lanark County are on newer Paleozoic bedrock of limestone or sandstone with deeper more alkaline soil originating from lacustrine deposits, and there you find more productive agricultural soils such as Appleton, Lanark , Snedden or Grenville loam or silt loam on the map.

Having returned to survey some areas, of Mississippi Mills in 2000, Kroetsch noted that the nature of soils has remained relatively the same with some exceptions. Human activities cause changes in classification on a small spatial scale due to over-agriculture, drainage of wetlands, addition of fertilizers, and atmospheric pollution. So they are considering adding a 12th soil type to be called anthroposoils. Generally, Kroetsch says, soil surveys have a half-life of only 25 years. Change will always occur, but at different rates. When forests were logged early last century soil became vulnerable to erosion. A more recent problem is earthworms. A typical forest will have a very thick ‘O’ horizon over a thin ‘A’ horizon. When non-native earthworms invade a forest they can very quickly consume the organic layer while at the same time depositing a thick ‘A’ horizon comprised of their castings. The absence of the ‘O’ layer is detrimental and the new ‘A’ horizon is too dense, leading to poor water infiltration and more erosion which is not good for the forest. We will hear more about earthworms at our November lecture as MVFN’s Nature Beneath our Feet series continues. Following the Lanark County Soil FUNdamentals talk there was an opportunity to socialize, enjoy refreshments or discuss soil profile samples and other items displayed by speaker, David Kroetsch of the Canadian Soil Information Service. Photo by Pauline Donaldson

2013 Spring Gathering: Looking Back and Looking Ahead: Nurturing our National Nature 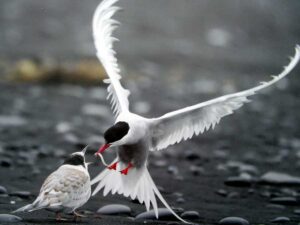